HLB McKeogh Gallagher Ryan’s Sinéad Mansell writes a follow-up article to her piece on the tax implications of employee share incentive schemes, looking at further case studies and the approach taken by Revenue and the Department of Finance.


Employee share incentive schemes are increasingly used by companies to reward employee loyalty and also to subtly align employee and employer goals. They can secure employee engagement both in their own role and in the organisation as a whole, think of those super jovial 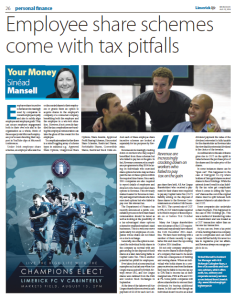 Under Irish employee share schemes, an employer allocates free or discounted shares to their employees or grants them an option to acquire shares in the employer’s company or a connected company, benefiting both the employer and the employee in a win-win situation.  However, as so often the case, if not correctly handled the tax complexities surrounding this employee remuneration can take the gloss off the reward for the employee.

Revenue are increasingly cracking down on workers who they suspect benefited from these schemes but who failed to pay tax on the gain. In fact, Revenue commenced a compliance programme in May 2014 focussing on individuals who exercised share options but who may not have paid the tax on these options within the required time frame. Since early 2015 companies are also required to report details of employees and directors who have exercised share options to Revenue. This obviously makes it easier for Revenue to identify and target individuals who have exercised options but who failed to pay over the relevant tax.

The Department of Finance has recently announced a public consultation process on how share based remuneration should be taxed as well as looking at the possibility of a tax-advantaged share options scheme for small and medium-sized businesses. This is a welcome move particularly for employees of companies whose shares are not listed on a stock exchange.

Generally, once the option is exercised the individual holds shares in the company as normal with any gain arising on the disposal of these shares at a later date being liable to Capital Gains Tax. This is another tax pitfall that employees can fall in to if they are not normally in the business of buying and selling shares.

If we take a look at some practical examples such as last year when Aer Lingus was acquired by British Airways owner IAG, and Aer Lingus shares were delisted from the Irish and London Stock Exchanges in September.

At the time of the takeover all Aer Lingus shareholders received a cash payment of €2.50 for each Aer Lingus share they held. All Aer Lingus shareholders who received a payment for their shares were required to pay any Capital Gains Tax (CGT) liability arising on the disposal of these shares to the Revenue Commissioners on or before 15th December 2015. The current rate of CGT is 33%. A CGT return is also required to be filed in respect of these disposals on or before 31st October 2016.

Many Aer Lingus shareholders were not aware of the CGT requirements and may already have missed the 15th December 2015 deadline.  We have been working with a number of them recently to regularise this and meet the upcoming October 2016 deadline.

It’s not only company employees who receive shares in their employer’s company that need to be aware of the tax consequences of holding and owning shares. Where an individual who holds shares in a company receives income from the shares they may be liable to income tax up to 52% that is income tax at their marginal rate, PRSI at 4% and USC at 7%. Some public companies will allow a shareholder to reinvest their dividends by buying additional shares. In this case even though an individual doesn’t receive an actual dividend payment the value of the dividend reinvested is fully taxable for the shareholder as Revenue take the view that the reinvested dividend is the choice of the investor.

As outlined above the sale of shares gives rise to CGT on the uplift in value between the purchase price of the shares and the sales price of the shares. In some instances shares can be “spun out”. This happened in the case of Dairygold Co-Op where holders of Dairygold shares received shares in Reox Holdings. While the spinout doesn’t result in a tax liability the tax rules get complicated when it comes to selling the “spun out” shares as the cost of the original shares must be split between both classes of shares to calculate the correct CGT.

Some companies also undertake a share buyback. This happened in the case of FBD Holdings plc. This was a method of transferring value to shareholders and was treated as a CGT transaction rather than an income tax transaction.

Many people also hold Vodafone shares as a legacy from the Eircom buyout in May 2001. Earlier this year Vodafone gave minor shareholders, i.e. shareholders who held fewer than 1,000 shares, the chance to sell their shares. The sale of these shares could result in a CGT liability. In 2014 Vodafone also sold their 47% stake in Verizon. Verizon paid partly in cash and partly in Verizon shares. Individuals who opted for the income payment were subject to income tax at their higher rate of tax, PRSI and USC. Individuals who opted to receive the money as a capital payment were taxed under the CGT system. At this time Revenue introduced a relieving measure which meant that individuals who acquired shares in Vodafone as a consequence of an original investment in Eircom shares in 1999 and who received a return of value of €1,000 or less will not pay either Income Tax, PRSI, USC or CGT on the return of values unless they opt to have the payment treated as income.

As you can see, from a tax point of view, holding shares in a company can be complicated and can result in a tax bill but luckily it is never too late to regularise your tax affairs, and Revenue always encourage people to do so.

If you have any queries on the contents of this article please contact Mary McKeogh or Sinéad Mansell of HLB McKeogh Gallagher Ryan’s Tax Department on 061-208050.

This article was printed in Limerick Life on 10 August 2016.