Our Tax Director Anne Hogan’s review of Budget 2023, with a high-level analysis of the key points of interest. 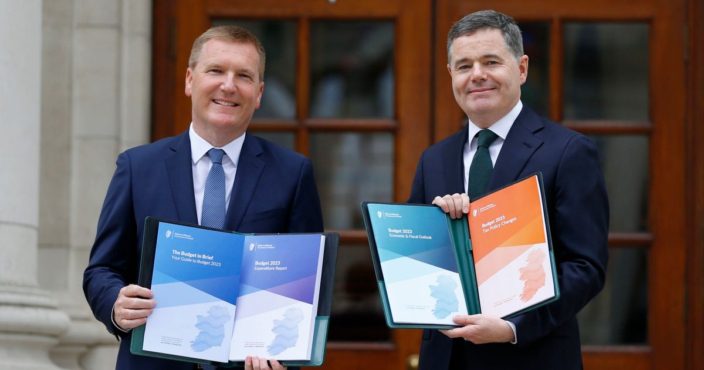 An extraordinary budget for 2023 of unprecedented scale was delivered by Ministers Donohoe and McGrath with measures totalling €11 billion announced (as opposed to the more usual €3-4 billion package). The importance and impact of Ireland’s 12.5% Corporation Tax rate was evident with Corporation Tax receipts exceeding expectations which allowed the budget to be funded without the requirement to borrow, unlike our UK neighbours. The emphasis made by the government that a substantial amount of these Corporation Tax receipts are driven by ten large companies was a stark reminder of the volatility of this income source and that that these funds cannot be relied on indefinitely.  Budget 2023 is the third in a series of “crisis” budgets following Brexit and the Covid 19 pandemic and the government were keen to emphasise that future budgets will not all be akin to this  “bumper” budget. In this exceptional budget the government is seeking to dampen the inflationary fire and address matters such as the cost of living issues, the energy price issues caused by the war in Ukraine and the housing crisis. Some of the headline taxation measures are reviewed below.

The main changes to Income Tax were as follows:

Taking all these measures into account the average middle income family with two incomes should be circa €1,660 better off.

Whilst it was acknowledged that further consideration will be given to a potential third rate of income tax this was deemed to be a matter for future budgets following further review.

A Temporary Business Energy Support Scheme (“TBESS”) was introduced to assist businesses with energy costs over the winter months. The support will equate to 40% of the amount of the increase in the bill subject to a monthly cap of €10,000 and a possible overall cap. October’s Finance Bill will detail the mechanics of the scheme. It is hoped it will clarify issues including whether the cap will be linked per company or per business premises.  Most notably the scheme has been stated to be open to businesses carrying on a Case I trade which would exclude Case II businesses carrying out professional services e.g. solicitors, accountants etc. The Finance Bill should confirm this.

The Small Benefit Exemption which facilitates an employer to provide a non-cash tax free benefit or voucher of up to €500 in value each year has been given a welcome increase to €1,000 per annum, effective immediately.

Other positive moves for SMEs included extensions to the KEEP and SARP regimes to 2025 together with welcome announcements regarding changes to the R&D tax credit and the extension of the Knowledge Development Box (KDB) and film tax credit for a further four years.

On a less positive note, and despite industry lobbying, the reduced VAT rate of 9% applying to the hospitality sector will revert back to the 13.5% VAT rate from 1 March 2023.

A scheme of accelerated capital allowances for farmers for the construction of modern slurry storage facilities was announced and, farmers will be pleased that several important agricultural reliefs that were due to expire at the end of 2022, were also extended. The flat rate addition for farmers was however reduced to 5% to comply with EU Directive requirements.

The temporary reduction in the VAT rate applicable to gas and electricity supplies (from 13.5% to 9%) that was due to expire on 31 October 2022 was extended to 28 February 2023.

Carbon Tax on fuels will increase as planned under Finance Act 2020 from the current rate of €41 to €48.50 per tonne of CO2. This increase will equate to an increase of just over two cent (VAT inclusive) per litre of petrol and diesel. During his Budget speech, Minister Donohoe stated that he is proposing to offset the Carbon Tax increase with a reduction to zero, from a rate of 2 cent per litre, of the National Oil Reserves Agency (NORA) levy. The price at the pump will therefore not increase because of taxes or levies.

A €600 credit for household energy bills will be paid in three instalments of €200, with the first payment to be made before Christmas and two further instalments in the New Year.

Consideration is also being given to capturing the windfall gains of energy companies which might also go towards funding any further measures required in future budgets.

This budget was unusual as the focus would normally be on the taxation side rather than expenditure but, in this instance, the expenditure measures were to the forefront. There were numerous cost-of-living expenditure measures with regard to social welfare etc. announced, some of the following positive measures to assist students merit a mention here:

The housing measures that were introduced included the rental tax credit of €500 per person, an increase in the amount of pre-letting expenses available for deduction from €5,000 to €10,000 in certain cases and the extension of the “help to buy” scheme to 31 December 2024.

A new Vacant Homes Tax (“VHT”) at a rate of three times the property’s LPT liability was also introduced which seeks to serve as a “stick” to encourage property owners to rent out their property albeit the potential effectiveness of this measure remains to be seen. The VHT will not apply if the property is vacant for genuine reasons including being recently sold, currently listed for sale or vacant due to occupier’s illness or significant refurbishment work. The VHT also does not apply to residential properties occupied for 30 days or more which, one would imagine, should serve to exempt properties such as holiday homes etc. The LPT database held by the Revenue Commissioners is likely to assist them in identifying the potential properties that this VHT will apply to.

The Residential Development Stamp Duty Refund Scheme and the Living City Initiative are also both being extended.

One of the surprise negative measures in the budget was the introduction of the Defective Concrete Products Levy of 10% on a range of 18 concrete products. The levy is to apply from 3 April 2023, it is likely that this levy will be passed on to the ultimate consumer which seems a strange move given the rising costs of construction already faced by those seeking to build new homes.

Budget 2023 will certainly put some money back in the pocket of taxpayers, which will assist with the increased costs of living. It is clear that the government is conscious that these unprecedented budget giveaway measures may still not be enough to address all the challenges that we may face going forward. This is evidenced by €2 billion that is being set aside in 2022 in the National Reserve Fund aka the “rainy day fund”, to be followed with a further €4 billion next year. The unpredictability of issues such as inflation and future energy prices may very well require these funds to be called on in the not-too-distant future.

Please do not hesitate to contact Anne Hogan, Associate Tax Director, McKeogh Gallagher Ryan with any tax queries on the Budget. ahogan@mgraccountants.ie